YES! Catastrophic Health Insurance Does In Fact Exist In Texas!

So let's do a quick rewind and tell the story about health insurance in Texas. Yes, we have catastrophic health coverage today. But the story of the process will help us understand how we got to where we are now late in 2019!

In a time not that long ago, health insurance in Texas was there to protect you when the proverbial stuff hit the fan. This was a time prior to urgent care centers, PPO Networks, and Emergency Rooms treating all forms of conditions. Texans tended to have a relationship of some sort with their Primary Cary Physician (PCP) and only used specialists and hospitals for large items. Simpler times if you will. Back then, you just paid your PCP a cash payment for your visit, and went on your way. You only messed with the health insurance company when it was BIG STUFF. 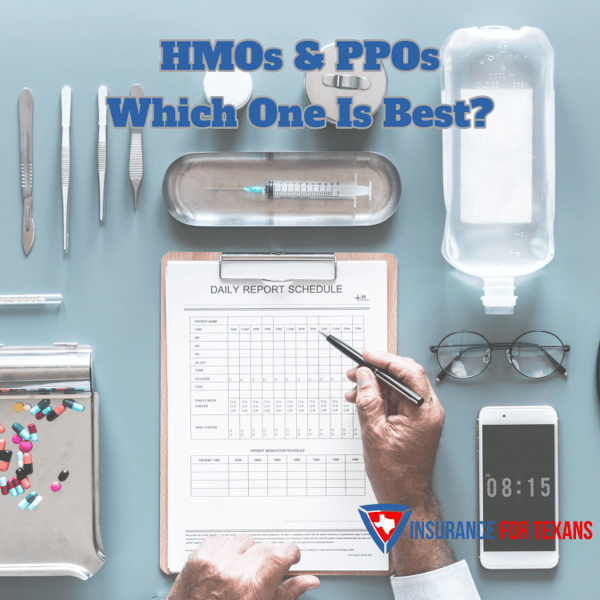 During the 1980's we saw the advent of HMOs (Health Maintenance Organizations) as the insurance companies tried to find a new way to package insurance and keeping folks healthy. They felt if they kept everyone in a contained network that they could control the costs of care in a more efficient fashion. It was not a Texan's idea, but it eventually moved in our direction. This brought the Primary Care Physician into the realm of insurance payments. The PCP like a stream of patients and the revenue that came with them, the insurance companies liked the ability to direct all activity, and the patients were promised not paying anything beyond their premiums. It sounded like the familiar win-win situation. And then the insurance companies figured out this wasn't such a good thing for them financially. All the while the patients and doctors became frustrated with referrals and in-network constraints. We like our freedom! What can we do???

So the 1990's brought us change in the form of the PPO Network. The push back on the health insurance companies' HMO idea was the invention of the Preferred Provider Network option. The PPO. The insurers still wanted to keep a network for patients to stay inside of so that they could control reimbursements to doctors for visits, keep an eye on patients and their care, and attempt to share costs with those patients. So they, along with the hospital based health systems that the doctors were slowly becoming a part of, began negotiating and creating a network of providers that their patients should see. In exchange for this, the doctors and health systems were granted payment levels in exchange for agreeing to set rates and being listed in the network. The insurers invoked "co-pays", deductibles, and co-insurance on the patients so that they had some incentive to control usage as well. The caveat was that if you strayed out of network, your prescribed benefits went down and your out of pocket costs went up. The networks became the key and the small independent practice physicians started disappearing.

Why Did The Independent Practice Physicians Disappear?

The networks became key for the insurers, and subsequently for the insureds as well. As the patients became entrenched in this idea that a trip to the PCP should cost either nothing or a very small co-pay, the physicians became pieces of the large health networks so that they could get the best payments from the insurance companies and have access to their patients from the PPO Network. As this consolidation occurred, new problems began to arise.

The costs of health insurance began to escalate at unheard of levels due to the vast increase in the processing of claims. When insurance companies were not involved in your visit to a doctor's office, the bill was settled between you and your doctor. The health insurance company did not care or have insight and so the process of payment was simple. As the health insurance companies began adjudicating all of the individual doctor visits, labs performed, or other lower level activities involved with routine care of a patient, they had to staff for those claims. Staff needs management. As both staff and management grow, middle management is needed. This effect was also compounded from regulation from the government in the form of things like HIPPA. The onus for payroll at a health insurance company ballooned to unprecedented levels. And that payroll brought massively escalated costs to those previously small level doctor visits. 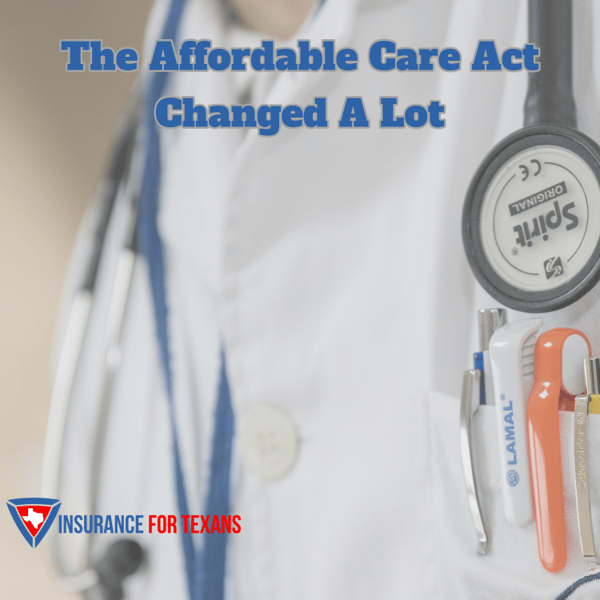 As the costs and out of pockets continued to sky rocket, the Affordable Care Act was signed into law in 2010. The politicians had had enough and put laws in place that they hoped were a remedy to complaints of health insurance. These remedies brought another round of change to your health care and it's delivery of payments. There were minimum standards of coverage, exchanges where it could be bought, and the requirement by law to have it. The insurers had to start making changes as they had to cover pre-existing conditions and all manner of things that cost them a lot of money in previous policies. Those changes ultimately resulted in escalating premiums, larger deductibles, and massive out of pocket costs. To many previously uninsured Texans, it was a God send. To many others, it was taking a bad situation and making it worse. As the angst built through the decade, the politicians took actions again to change up the laws in 2018. Which brings us to where we are today!

Whew! That was a long story to say that those law changes in 2018 made it so that Texans could buy Catastrophic Health Insurance without penalty from the government. It meant that those who wanted things a different way, an older way actually, could choose to do things on their own terms. 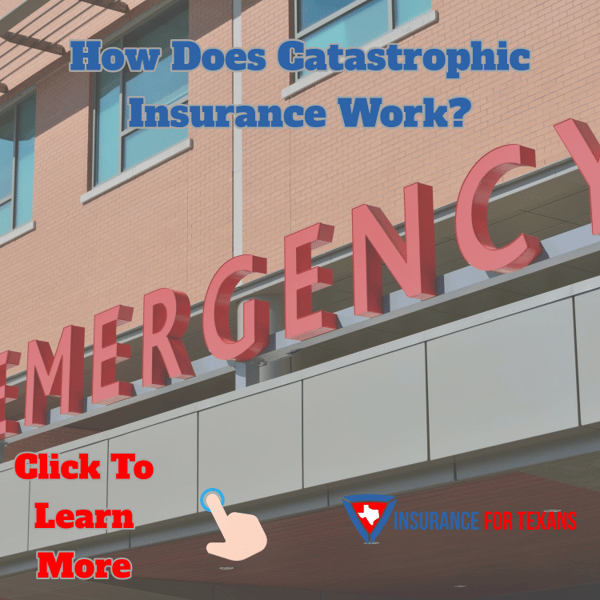 How Does Catastrophic Insurance Work?

The Critical Illness portion of the catastrophic health insurance policy is designed to provide protection around major illnesses or hospitalizations. These would include things like Cancer, Stroke, Heart Attacks, Gastrointestinal Illnesses, etc. The policy will cover your treatments and potentially surgeries for new critical illness events.

The Accident portion of the catastrophic health insurance policy is designed to provide protection around those accidental things that occur and rack up big medical bills. Think broken legs from crazy mountain bike crashes or falling off of your roof while hanging the Christmas lights. These things can result in large Emergency Room bills or even hospitalizations.

The Hospital Indemnity portion of this catastrophic health insurance policy is designed to help cover deductibles and coinsurance costs incurred with either of your first two line items. This will pay you a flat dollar amount per day that your in the hospital or even for surgery.

How Are Claims Paid?

The Critical Illness and Accident portions of the policy generally work off of a deductible amount being paid by the insured first. At that point, the remainder of the coverage is going to be split between the insurance company and the patient based off of a coinsurance provision. That means after the deductible is satisfied, the insurance company will pay 70%, 80%, 90%, etc of the remaining billable amount up to the policy maximum. The other 30%, 20%, 10%, etc is ultimately the responsibility of the insured.

Remember that Hospital Indemnity portion of the policy we mentioned above? This is where it comes into play. Since it pays a flat dollar amount per day in the hospital or for surgery, those funds can be applied both the deductible and coinsurance costs incurred by the patient. If the policy plan is robust enough, the total bill could potentially be covered by the indemnity plan for you. 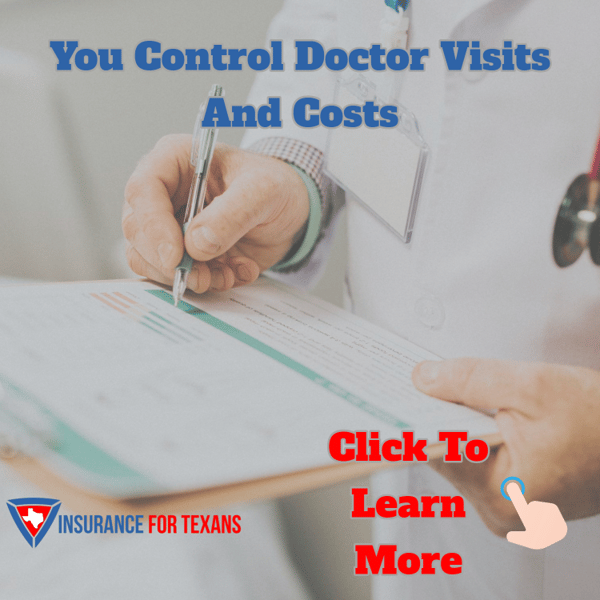 What Do I Do About Doctor Visits?

Since the catastrophic plan does not mess with your doctor visits, you will merge into a cash pay world for health care. It sounds scary at first. Take a deep breath and look around though. You will quickly realize that there are doctors who operate completely outside of the insurance system. Crazy, right? These doctors will have very affordable fees for the services that they provide directly to you and your family. Their goal is to make sure that you can be taken care of at the best price possible. And remember, there is no network check to perform or lose. You and your doctor decide if you want to work together.

Additionally, many of the families have begun to leverage Direct Primary Doctors to go with these plans. These doctors construct private contracts between their practice and these families to provide access directly to the doctor on an on-going basis. This plan generally involves a small monthly cost, but provides round the clock access in many cases. It creates a deep relationship between Doctors and Patients so that the greatest of care can be provided. These kinds of doctors can be located on this map. What many Texans have begun to discover is that combining catastrophic health insurance with a Direct Primary Care physician has led to a much better health care model while putting tangible money back in their pocket.

Can I Talk To Some One?

If you are curious, not sure about your options, or worried about a pre-existing condition getting in the way, we would be happy to help you sort out your options. The agents at Insurance For Texans love helping our neighbors. We will tell you straight up if it just doesn't work for you. We strongly encourage people taking the time to educate themselves rather than feeling hopeless thinking that there is only one path to health insurance success. If you would like to speak with one of our agents, click the button below to schedule a consultation.